Fireside chat with Jeff Raider, Co-Founder and CEO of Harry’s, and Jared from Thrive Capital

At the NYU e-Lab, several InSITE fellows sat down with two luminaries from the entrepreneurship and venture capital communities. Jeff Raider, co-founder and co-CEO of Harry’s, a new brand of high-quality men’s shaving and grooming products sold directly to consumers, and Jared Weinstein, a partner at New York-based venture capital firm Thrive Capital –founded in 2009 and famous for quickly making high profile investments and exits in companies including Instagram, GroupMe, Twitch, and HotPotato –discussed entrepreneurship and the mindset, drive, and perspective that has been part of their success in building and investing in companies. 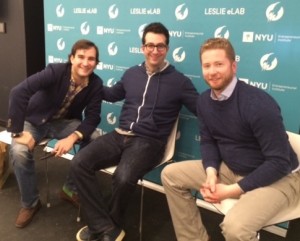 Growing New Companies, Managing Risks and Making Bets
Jeff, who is also a cofounder of Warby Parker, a brand offering designer-like eyewear at a revolutionary price while leading the way for socially conscious businesses, discussed the differences between his previous success at Warby Parker and the challenges of building Harry’s. Harry’s offers a high-quality shave at a reasonable price, and has rapidly grown to be a market leader.

At the time that Jeff pitched Harry’s to Thrive Capital, the company was just a business plan and a contract to purchase 1 million razors. Harry’s was a big bet for the VC firm. This was very different from when he’d raised money for Warby Parker, where the company had been bootstrapping for a while, and already had a clearly profitable product and customer base. Thrive is an early investor in both Warby Parker and Harry’s and Jared has been involved in Harry’s from the beginning. Throughout the chat, Jeff and Jared emphasized the importance of partnership, understanding risks, and understanding the customer.

The main constraint for Harry’s was securing premium razor blades, which are only produced in a few factories worldwide. Jeff and his co-founder Andy Katz-Mayfield were able to secure a contract for a million razor blades from one of these factories, located in Eisfield, Germany. As Jeff and Andy learned more about the razor business, they realized that producing their own razors as their company scaled would be very complex to recreate. The factory they were working with had 400 workers, with an average of 15 years in the industry. They also realized that the success of their business hinged on the supply of razors from this factory. The solution? Purchase the factory.

When Jeff proposed this to his investors, Thrive was really the first to take the idea of buying the factory seriously –they were able to see past the cost, and understand that this would take the #1 risk –supply of razors –off the table. At the same time, the combined company would be able to invest together in product innovation with direct customer feedback.

Investing and Execution
Thrive has invested in a variety of very successful companies, including Stripe, Instacart, and Classpass, and in a sea of good ideas, they focus on (1) ideas that scale; and (2) finding “killer entrepreneurs” capable of executing on good idea and taking it to scale. Once that entrepreneur has been identified, Thrive puts in the hours, not only on due diligence prior to investment, but on supporting the company’s growth after investment. When growing a company, one of the key decisions is knowing who to hire, and when –and having access to and then choosing the right people for the right roles is key.

Social Impact
Both Jeff and Jared are very serious about social impact. Jared strongly believes in public service and paying it forward. This dedication to social causes is evident both in his role in the public sector as special assistant to President Bush, and in his dedication to giving back in his hometown of Birmingham, Alabama. Jeff believes that “companies have a higher standard they need to hold themselves to today,” and should have social missions that echo their corporate missions. Harry’s focuses on projects with a mission of “preparing people for what’s next,” and currently donates 1% of sales and 1% of time to social impact projects. The company partners with City Year, recently held a Hackathon, and runs a university program called H’University to help prepare college students for the real world.

The work that Jeff and Jared have done have led to companies that are better for customers, while promoting broader social benefits. As InSITE Fellows pursuing our own entrepreneurial paths, it was valuable to hear the challenges and successes shared during this fireside discussion, both through specific lessons and overarching inspirational success stories.

Natalie Baer is a first-year MBA student at Columbia Business School and an InSITE Fellow. Prior to CBS, she was the OTEC Program Development Manager at Ocean Thermal Energy Corporation.