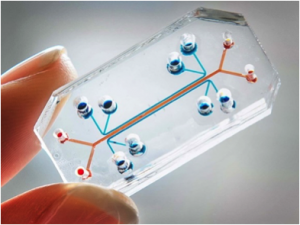 What are microfluidics?
Microfluidic devices are chips that contain small channels the size of micron (about the size of a human hair). These devices allow for precise handling and movement of tiny droplets of fluid. They are sometimes referred to as “lab-on-a-chip” for their ability to reproduce a lab test on a much smaller scale, saving time and money. Combining these fluid handling abilities with live cells and mechanical signals can make up an “organ-on-a-chip.” These “organs-on-a-chip” simulate healthy or diseased tissue environments and aid in the understanding of disease mechanisms. They can also potentially test novel treatments in a more physiological environment before going into the clinic. Originally pioneered in the 1980s, microfluidic technologies have been a thriving area of academic research ever since. For example, Dan Huh at University of Pennsylvania has designed a “lung-on-a-chip” device that mimics the mechanical breathing stresses felt by the human cells in the lungs, enabling potential drug testing on an inexpensive, highly controllable device. You can see a TEDx talk on his research here (http://tedxtalks.ted.com/video/Engineering-human-organs-onto-a). Numerous academic groups have also been able to scale down a DNA replication process to a microfluidic chip that is about the size of a quarter. Why then have microfluidics based startups had so much difficulty breaking through to become commercially viable businesses?

Commercialization difficulties
Microfluidics has been in the “the next big thing” stage for years now. Some have claimed that microfluidics is just missing that “killer app” that addresses a need much better than any existing technology. During the late 1990s and early 2000s, a number of companies such as Fluidigm and Micronit emerged promising to take breakthroughs in low-cost speed and reliability seen in the lab and translate them into commercial products. However, over the years, the lack of the emergence of a high value blockbuster device that could generate significant revenues have dulled the enthusiasm from investors, leaving it to academia to move microfluidic technology forward.

Since then, high profile companies such as Theranos have been able to find a potential blockbuster application able to demand huge valuations and investments, but have been unable to deliver on their technological promises in terms of reliability and accuracy (in addition to their other business issues). Most other microfluidics startups, although able to now fundraise, have not been able to get off the ground. Reasons for this include:
• High-value applications are still mostly unknown
• No industry standards – products have yet to show reliability, which could be a result of the academic “rapid prototyping” strategy
• Not highly scalable – Although microfluidic devices are described as “chips”, they don’t come close to the scalability of computer chips, which enable increased processing power by decreasing the size of the individual components. Because fluids behave differently at extremely small scales, decreasing chip size further does not increase utility
• The differing needs of academia vs. industry have led to the development of tools fitting academia better at the expense of translatability to commercial use

What developments might suggest a brighter future for these startups?
For the past 20 years, the vast majority of microfluidic devices have been made out of a polymer called poly(dimethylsiloxane), or PDMS, which is transparent, biocompatible, flexible, and inexpensive. This material has been perfect for the academic lab, but the fabrication process for these devices are human labor intensive, which has proven difficult in scaling up production. However, recent developments in 3D printing have the potential to bypass this barrier. Advances in biocompatible 3D printing polymers, printing resolution, and rapid, high-throughput manufacturing could minimize the barriers to manufacturing and enable the translation of the academic success of microfluidics to commercial success.

There are a number of potential applications that, due to recent trends, may provide the microfluidics industry with that first “killer app” it needs to break out of academia:
• Point-of-care diagnostics – Developing a “sample in-answer out” setup with smartphones could increase the portability of diagnostic devices for time-sensitive issues, such as assessing platelet dysfunction in trauma patients.
• Organ-on-a-chip for drug testing – With the ever increasing price of clinical trials, stronger preclinical data is necessary to determine which drugs to bring into human trials. An inexpensive organ-on-a-chip that could be used to test drugs in conditions similar to those they would see in the body could aid in reducing trial costs and bringing better drugs to market.
• Circulating tumor cell detection – High-throughput, single-cell analysis allows for the identification of small numbers of circulating tumor cells that are the seeds of metastatic cancer.

The potential of microfluidic technology is still as exciting as ever. The wait for commercial success has been long and difficult, but the first blockbuster device may be just around the corner.