A few months ago IBM opened their new Watson Group Headquarters in Manhattans Silicon Alley, a testament to the continued growth of New York City’s tech space. Along with their swanky new offices, IBM also set up the Watson group with a $100m venture fund to invest in startups utilizing their technology. The majority of the fund has yet to be disbursed. 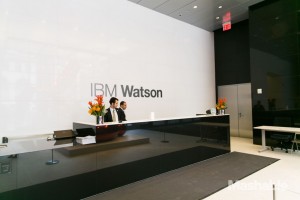 For those few who may not have heard of it, Watson is specialized software, that IBM has developed, which processes natural language data inputs and interprets vast stores of data to assists decision makers. Imagine Google Search, except you can ask a question in spoken language, and it gives you a specific answer to the question (and tells you if it doesn’t know!). IBM calls this ‘cognitive computing’. The group has had enormous success over the last couple years, selling the software primarily to hospitals to assist doctors with patient diagnosis, and to any company with a call center to answer technical helpdesk questions.

There are a huge number of additional potential applications for Watson, and to highlight this, IBM hosted an app development competition in January 2015 to try and inspire students to develop some new uses. Eight schools competed (although none from New York! What gives?) the University of Texas at Austin, Carnegie Mellon University, Ohio State University, Northwestern University, Rensselaer Polytechnic Institute, University of California, Berkeley, University of Michigan, and University of Toronto. The first place winners took home a $100,000 prize.

The three winning applications were:

You can check out all the demos here.
.
I believe artificial intelligence, ‘cognitive computing’, machine learning or whatever else you want to call will continue to grow rapidly in importance in the coming years. IBM’s decision to locate in New York City is a huge boon to the tech industry here, and hopefully New York will be a hub for this exciting new technology into the future. From a more immediate standpoint, there is currently at least $100 million dollars in funding for the taking in this relatively untapped field. I think it’s time to start dreaming up ideas!

Harry Ingram is a first-year MBA student at NYU Stern School of Business and an InSITE Fellow. Prior to Stern, he was an engineer and worked with a New England hydropower startup.