Initially this was supposed to be the second part of my notes from the recently concluded private equity and venture capital conference at Harvard Business School (part 1 is here). However, I decided to expand the topic and write about the state of venture capital in general as we head into 2015. One of the major conversation points in the conference (and there was certainly a debate about this) was about the success of venture capital as an asset class. I heard opinions from LPs, VCs and Entrepreneurs on this topic and I have tried to capture them here in this post.

From data released by Cambridge Associates (below) last year, venture capital in the US seems to have outperformed the major indices over most time horizons with only the 5 year window understandably under performing.

The last five years have seen tremendous change in the venture capital industry: capital flows have increased, business models have evolved, and new entrants – from crowd funding to hedge funds – have challenged the dominance of storied firms. The HBS conference provided interesting insights into how the venture community perceives its own success as an asset class. Some of the content below is based on what I heard at the conference. While one may question whether VC is a good asset class when compared to all other alternative investment options, based on the data I am seeing it seems like the VC industry is not in bubble and it is fundamentally different from the dot-com bubble in 2000.

According to pitchbook, in 2014 $59 billion was invested throughout the year across 5,160 rounds, the latter representing a 16% drop from 2013 (6,124 rounds). But the total dollar amount in 2014 was almost a full $20 billion higher than the previous year ($39.4 billion). The two $1 billion+ rounds raised by Uber in 2014 were symbolic of a larger trend: VC-backed companies are waiting longer to go public than they have in the past. In some cases it appears that founders would rather raise money in the private market instead of facing the volatility of the public market. 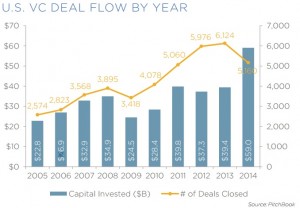 Bubble or boom – Comparisons with the 2000 Bubble

There is no general consensus on whether or not we are in a bubble. Venture capitalists and industry analysts have laid out arguments on both sides of the debate over the course of 2014. Whether or not a bubble exists, it is clear that soaring valuations, increased venture funding, and a sea of new financing options are opening up more doors for entrepreneurs seeking funding. Most VCs agreed that venture capital has not performed as well as other asset classes such as hedge funds or PE. However, the general opinion was that we are not in a VC bubble. The differences between the state of VC from 2000 and 2014 indicate that the venture capital industry is not in a bubble but in a state of transition. As Kate Mitchell from Scale Venture Partners noted, ” We’re in a tech pricing bubble, but not necessarily as much of a capital bubble. There’s been a reshuffling in chairs [as to who’s investing], but not a huge increase in the amount of capital.”

There have been fundamental shifts in the economy with technology having a greater impact on the economy as a whole. A rough check shows that technology firms form 37% of the top 20 companies in the S&P 500. ( Apple, Google, Microsoft, Oracle, AT&T, Amazon and IBM). Another interesting datapoint was the mix of the type of exit. In 2000, approximately 35% of the exits were through IPOs while in 2014 the number hovered around the 10% mark. The mix in the type of exits between M&A and IPOs hasn’t fundamentally changed in the last 4-5 years. Also the total dollar value of exits hasn’t soared in the way it did in 2000. This is obviously backward looking data but essential to understand the differences between the situation then and now. The graph below shows the mix of exits in 2014 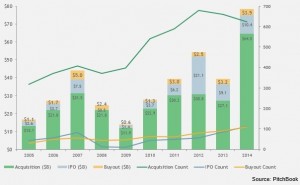 In the years since the dot-com crash of 2000, venture capital firms have generally lagged behind private equity firms in generating returns. But that trend has recently reversed with returns from venture capital outpacing those from buyout firms, according to data released by the research firm Preqin. Venture capital distributions have hit the highest level in almost 14 Years. Venture backed IPOs and M&A transactions returned unprecedented capital to investors. With $46Bn in venture backed M&A transactions, 2014 easily was one of the best years for venture capital since the dot-com boom. One could argue that this is similar to 2000 levels and hence indicative of a bubble in the industry. However, the levels of return are still well below 2000 levels. The 25.9 % return in 2014 is the venture capital industry’s best showing since the dot-com crash. In 2000, before the crash had ruined the industry’s results, venture capital funds had a 38.1% return. As the graph below suggests, valuation multiples are highest since 2005. Funds that started investing in 2010 have so far recorded a 14.5% IRR. Funds that started investing in 2005, which are now near the end of their life, had a median internal rate of return of only 3%. This could be another sign of things to come in this cyclical industry and I would argue that the next few vintages in VC funds are not going to be as successful. 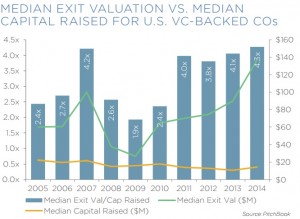 3) Fundraising- Barbelling of the VC Industry

With 208 U.S. focused vehicles closing on $32.1 billion last year, 2014 easily surpassed 2006 to set a decade high in fund count. What is interesting though is that the mix of funds has changed over time. This is something that VCs identify as “Barbelling” of the industry. 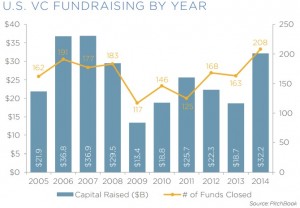 Increasingly we are seeing venture funds gravitate towards two ends of the spectrum of fund size. LPs are concentrating on the mega and micro-corners of the VC market as investment trends evolve.Two thirds of the venture funds are less that $100 million in fund size. The largest 5% of funds hold 35% of venture dollars. Are we seeing the rise of the institutionalized venture asset manager ?

In 2000, $105Bn was invested in 8041 deals, whereas in 2014 $59Bn was invested in 5160 deals. In other words, the run rate in 2000 was 1.5x the run rate of 2014. In 2000, there was such a steep rise in capital that venture capitalists threw money at seemingly any company that had something to do with the internet. In contrast, venture capital deals today are narrower in focus. VCs willing to invest at lofty multiples in companies with proven business models and products that are further along the adoption curve. Thus while there is price competition for some of the more successful companies in later rounds, there isn’t heavy price competition for an early stage deal. This is different from 2000 where there was a ten fold increase in capital and heavy price competition for all stages of deals. Median valuations were up across the board in 2014, but Series D+ valuations, in particular, saw a 50% jump from 2013 to 2014.

Compared to 2000, there are definitely fewer “pets.com stories”. In 2013, 65% of US startups reported to have met or exceeded their goals. Many late stage companies today are larger, more mature, and stronger in terms of fundamentals, and thus merit higher valuations. If you consider a sampling of ten late stage venture-backed companies – including Palantir, Rocket Fuel, Twitter, Veeva, and Zulily – their average revenues grew by almost 120% in 2013 to nearly $320 million. These companies and others such as Airbnb, Box, Dropbox, Pinterest, and Uber, were studied by Aileen Lee of Cowboy Ventures in 2013 and are now commonly referred to as Unicorns (defined as private software companies started after 2003 that have reached valuations of $1 billion or greater). As companies remain private longer, VCs have more time and opportunities to participate in the steep portion of companies’ value creation curves. As a result there are an unprecedented number of “unicorns”. Today, there are 48 unicorns, which are primed to go public over the course of the next few years. Thus, the venture capital funds that have invested in these unicorns will continue to distribute capital to their LPs over the next couple of years as these companies start going public. However, according to an article published by Forbes, surprisingly, only 27% of the investments made by VCs in unicorns paid back a fund, despite the high exit valuations. The reason behind this is that many of these investors are big funds that came in at later stages and high valuations. They get the glory but not the high return. The National Venture Capital Association’s report shows that a quarter of the $48.3 billion invested in startups last year went to late-stage investment rounds.

What VCs need to find are “dragons” . A dragon is a company that returns an entire fund — a “fund maker.” And dragons are four times as rare as a unicorn. Of the 21 firms that have invested in dragons only 3 have done it multiple times.

This reaffirms the view that while venture returns might not compare favorably with other alternative investment classes, the core investment thesis in venture capital is based on stronger fundamentals compared to 2000.

We might not be in a bubble like the dot-com era but we very might well be entering a period where venture capital returns will be depressed. The worrying factor here is that private market multiples are outpacing public market multiples. So far the dispersion in these multiples is not huge. I will be keeping my eye on whether the multiple gap widens or shrinks. Right now the US public markets look well positioned for a multi-year run of stable growth based on solid fundamentals. The P/E ratio of the S&P 500 is 19.73 which is comparable to the 2005 levels. I believe we have a couple of years before a reset kicks in. Thus the possibility of these unicorns going public remains open till the public markets hold up and the dreaded late stage down round might not happen.

As the industry continues down the barbelling path, two clear strategies remain for firms.The figure below shows the returns of small funds vs larger funds. Unsurprisingly, it shows that smaller funds have a higher probability of generating returns greater than 2x compared to the larger funds. 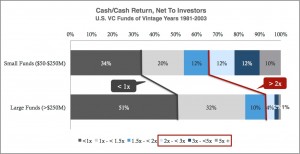 From an investment thesis perspective, the best course of action for larger funds is investing in companies that have a shot at surviving a potential bursting capital bubble. Unicorns stand a great shot at surviving a capital burst. These funds will continue to put capital to work by participating in late stage financing of unicorns. The returns might not be great but the risks of complete failure are also much lesser.

For smaller funds the strategy would be to invest in companies with shorter exit horizons. Smaller exits are easier to find and more numerous. Given the general favorable trends over the next couple of years, these smaller funds should invest in companies that seem likely to raise an “up round” in their next financing. Looking at tech hotbeds in countries such as Israel, China and India to find companies and bring them into the fold of the silicon valley for a subsequent up round could be one of the deal sourcing opportunities.

Abhay Mavalankar is a second-year MBA student at NYU Stern School of Business and an InSITE Fellow. Prior to Stern, he worked in venture capital and financial services.